Look at Kelantan On 2 Wheels

This time somewhere not too far from us but yet one of the least visited by us, Malaysians.

This is my very first time to step on the east coast part of Malaysia >v< I have heard good stories about the place.  Good people and unique food. And I love food!

Upon arrival, the friendly people from Tourism Malaysia Kota Bahru brought us to a warong place inside the Kampung Kraftangan (Handicraft village) for lunch. What a good start XD.

It’s my first time to eat catfish and I can say it’s good and has a very unique texture. 😀 Well, I love fish. LOL The deep fried chicken on the other hand was very tender and not oily at all but actually I was hoping it was deep fried with lots of spices. hehe

They say do what the Romans do in Rome, so we eat what the Kelate people do in Kelantan XD and eat it their way. With hands.

Kinda tricky tho as the rice was very hot.  At times, I feel like I’m juggling the rice more than eating. hahaha

Check out the other dishes I had. I have no idea the names of the dishes here except the one on top left, it is called Budu. It taste a bit like fish sauce but with a bit of sourness and sweetness in it. Goes very well with rice. 😀

After a good lunch, we went on for a Volkswagen Combi Ride. I love this van. So vintage and hippy!

Actually, I wanna drive one and go for a road trip to Bangkok with my comic blogger buddies in KL!! hahah sounds like fun right? hehehe Any sponsors? LOL

We went to the beach for hi tea. We had Colek, the dish on the bottom left, it’s deep fried seafood served with a sweet chilli sauce with grounded peanuts. Very nice ^ O ^ but not as nice as the dish beside it.

Maggie Kari Ketam (Maggie Curry Crab), this one is pure awesomeness. The Maggie noodle was springy and curry was strong. 😀 And with the addition of crab.

Purrfect!! :3 I can eat this every day XD

Our tour guide told us, that the one I had wasn’t the best one in town. OAO !! I was like…

I wonder how good is the best one in town. Must really try it one day.

After the crab high tea, we rest a while before visiting a Honey “Museum”

Learned something new about the different types of bee hives and how unique and different are the one they have here. They even sell honeys here. If you’re a fan of honey, do drop by and have a look. ^ V ^

Dinner was served too.

The famous Kelantan Nasi Kelabu (top right). It actually tasted like Thai Southern Rice Salad. Not really that fancy it as I’m not fond to the grassy taste of it.

And no, they don’t eat owls. That’s just their pet like Harry Potter. Unchained and un-caged, the owl can move around as he wishes to. Awesome! I wanted to pet it but afraid it will peck me LOL

Just some shots of the street outside my hotel. It’s interesting where all the shops here have Jawi writings on it even the Chinese coffee shops. Hmm I think it’s the only state in Peninsular Malaysia with such practice?

Many outsiders who never visited Kelantan thought that pork is very hard to find in this state where 90% population are Muslim. I actually found one pork satay stall just by the road side and only few metres away from this Muslim mixed rice stall. I heard from the locals, there are even a market where pork are sold openly with other stalls and the local Muslim are okay with it. Suddenly, I feel home. ^_^

Our trip this time is very different as we gonna travel on 2 wheels. It’s been ages since I last cycled. It feels so good to back on 2 wheels.

I love having fresh natural wind blowing to my face~~

Okay, not this kind of natural air >_<

Along the way, there’s a few places of interest such as Batik workshop, and Kriss & Dagger maker workshop where they showcase the production/manufacturing of the products.

We also get to see Malaysia’s top Top-spinning players display their skills.

A River Fisherman and a Trained Monkey preparing some extra food and drinks for our lunch. 🙂

And here’s the other dishes waiting for us.

Come guess which plate is mine?

After that we went back to Hotel to be entertained with Shadow Puppet Show and Dik Barat.

Something different about the Shadow Puppet Show we had. Looks familiar right? hahaha that’s the famous Darth Vader and Storm Troopers. Modern touch to traditional show. ^_^ Tho the literal translation of the names into Malay language is kinda weird.

On the other hand, Dik Barat is a very interesting performance tho where a bunch of guys will sit in a circle and sings their hearts out as if they trying to force the heart out of their mouth. Lol. All their veins can been seenon their face and neck when they sing. Something like this.

Good show must comes with good food. 😀 And we had some really nice one that night.

Super Duper sweet jelly dessert on the top right. Kelantan people or Kelate love sweet food. Most of their food are sweet and some like one-bite-can-get-diabetes sweet. Something different from what I expected. I always thought Muslim food are more towards spicy.

Oh that white looking dish on the bottom left is Laksa Kelantan. Very different from other laksa. Not sour, not spicy, not too milky too.

Another morning ride and I love this ride a lot. I get to cycle by the sea under shady tall coconut trees, with sea breeze, cows by the road side, and kids playing on the field. Ahh that peace and calm feeling…

It was a 30-45 minutes ride to reach homestay/fishing village. There’s a very old school store and I bought a Pulut manis (sweet glutinous rice with santan) from there (the one on the bottom left). Omg!! Very nice :3

Took a small walk around the village. We even found a small bomb shelter left from WWII there.  (top right photo)

Too bad it was monsoon, else I feel like …

But still sitting on the beach was good enough. After chilling for a while, we cycling back to the hotel before the day starts to get hot.

Later that day, the hotel arranged a high tea session with a cultural show for us. I saw this poor baby monkey there. Poor thing lost her mother, she died somehow, so the hotel people adopted it. It’s soo tiny. >_<

I had some local food while enjoying the show. 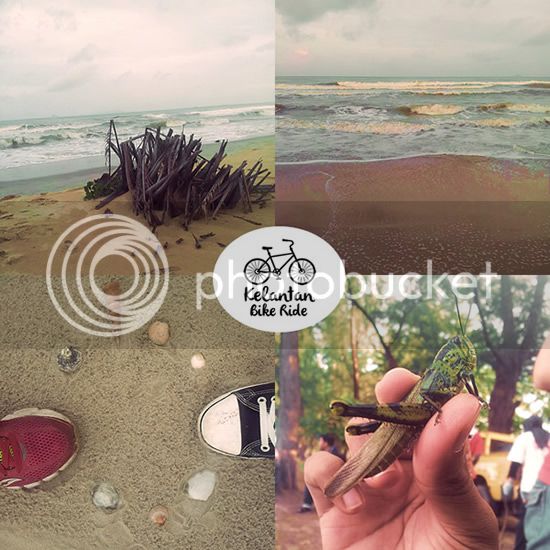 Took a walk by the beach before the sun sets. Missing 7 members of  my travel group, hence I replaced them with sea shells. Hope to see you all soon in 2014. >v<

Friends come and go but some you know they will be there for you when you in need of them even you do not meet them often, or contact often or have not even meet in real life before. > v <

Sometimes I find how friendship works is weird.

Food, food and more food. All the calories burned during cycling came back in an instant. After the relaxing walk by the beach. We went for a steamboat + seafood dinner. One word, yummy!!! Maybe because Kelantan (Kota Bahru) is located just next to the sea, so all the seafood were very very fresh. And I love seafood!!! (I’m a cat, duh)

Dropped by Wakaf Che Yeh (Che Yeh Night Market) before the night ends. It’s already 11pm at night and the place still very crowded. It’s basically like your night market in KL but opens until late night around 1am. I heard there’s another market which is located near the Thai border that has many Thai products * v *

Found Red bull selling at RM1 only hahaha super cheap tho the taste a bit dilluted. And that’s my Potong (cut) ice cream that cut off a long block of ice cream, champagne flavor.

Then, it started pouring..

Okay lar, at least it was not during our cycling session. hehehe

It was my last day in Kelantan. To complete the trip, one must really try their signature Teh Tarik Madu (Honey Pulled Tea).

Just look at the foams on the tea. How was it? AWESOME!!! 😀 Wasn’t as sweet as I expected it would be (which is good). My teeth can’t stand food or drinks that is too sweet.

The fish soup was good too. 😀 Seriously, a must visit!!

We dropped by a meat floss factory nearby and I met a friend over there who was the same color with my outfit fur of that day. Hahaha honestly I almost die as the weather was super hot and I was wearing long sleeve.

After that, we went to the last stop of the day and the trip, the famous Central Market of Kota Bahru, Buluh Kubu Market. I shoudn’t have taken a photo from the top as it was too mainstream. Should have thought of that earlier. >_<

Kelate people are warm and friendly, the food was unique and tasty but one thing I don’t like is they are selling turtle eggs in Kelantan. 🙁  Hopefully, this practice will stop one day in Kelantan before the turtles extinct (which they are going to).

It was a great few days in this forgotten kingdom. There are lots more places I didn’t manage to visit during this trip. Will visit again one day. If you thought of escaping the noisy and busy city of KL, you can try put Kota Bahru into consideration. ^^

They have homestay programs too if you’re interested in knowing more of Kelantan as a Kelate.

Nevertheless, a big thank you to Tourism Malaysia Kelantan and Air Asia for this wonderful trip.

AirAsia is flying to Kelantan daily from LCCT, KL and 3x per week from KK, Sabah.