Journey into Bario with MasWing

Woke up like 5 in the morning to catch my flight from Kuching- Bintulu – Miri at 0645.

It’s my first time taking an ATR (the name of this plane type) and also MASwings. 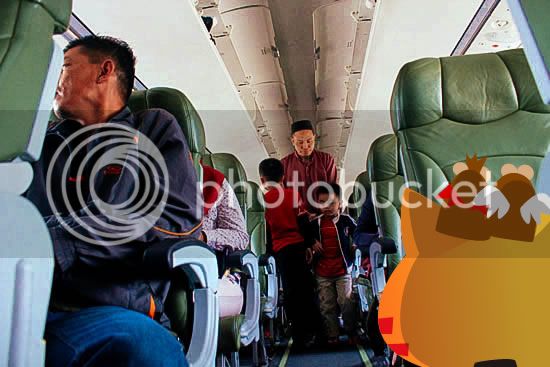 The plane is about three times smaller the size of a Boeing but still very cozy.

As it’s my first time taking an ATR, I was very attentive to the safety video. #Firsttimeinmyhistory Hahah well, just in case there’s an emergency, I know where to jump out from. LOL

As ATR is smaller..

We did a transit at Bintulu before reaching Miri, it was a 20 minutes stop.

And the best part, little snacks are provided~ Really save my life there as I was dead hungry.

I had two rounds of it. Hehehe. One from my Kuching – Bintulu trip and another from Bintulu-Miri trip.

After 2 hours including the Bintulu stop, I reached Miri Airport!

This is my first time here and it reminds me of Kuching’s old airport.

After some ding dongs, we’re ready to depart for Bario. Wheee!!! Although, both of us are taking different flights and routes but still Wheeee!!

MASwings is the sole airlines into Bario.

But this time we’re not taking an ATR but a Twin Otter instead.

It’s a very cute plane, a 16 seaters if not mistaken.

See how cozy it is.

Their DSLR is giving them out that they are not Bario locals, everyone is excited to go into Bario and also taking the Twin Otter. The feeling of taking a Twin Otter is very different from the bigger airplanes like  Boeing or ATR. I would suggest everyone to experience at least once in their lifetime.

The Twin Otter flew at a low altitude and you can have a very great view of the land below.

The rate of deforestation is scary in Sarawak.

Finally some greenies but sadly somewhere around this part will be flooded for dams.

That’s the road to Bario and other villages. It takes 10 hours to reach Bario whereas 50 minutes by MASWing.

Taking a Twin Otter really feels like a bird flying through the sky.

That’s the legendary Batu Lawi, the landmark of Kelabit Highland, it’s a mystical and sacred mount among the Kelabit and Penan people.

And not long after that, we reached Bario. Wheee !! 😀

It was a sunny day yet the wind is very cooling.

Alright! Now I can’t wait to get eat Kelabit Food!!

On the side note, please help to send me far far away. Do help to vote for me please for this travel blogging contest~~

End of Gawai Trip at Semulong Ulu Longho...
How To Get Into Bario?
It was Papa Day Yesterday but Papamiao.....